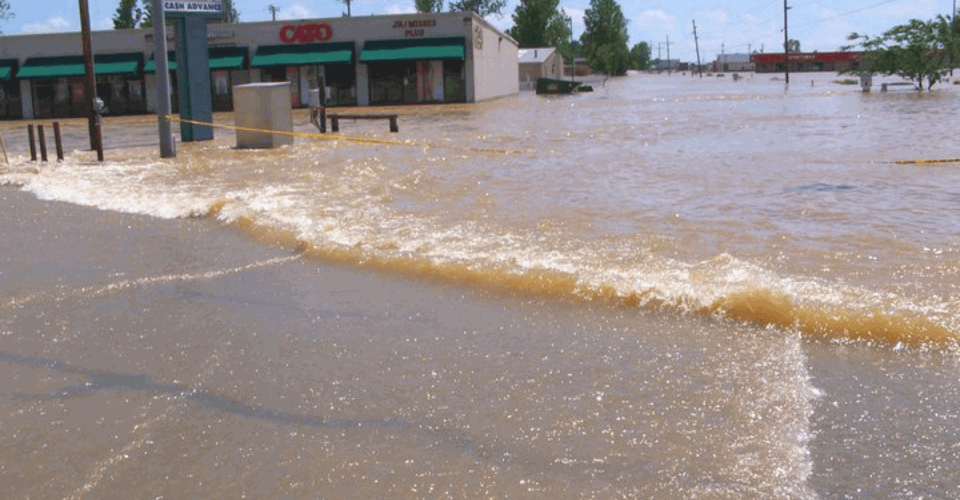 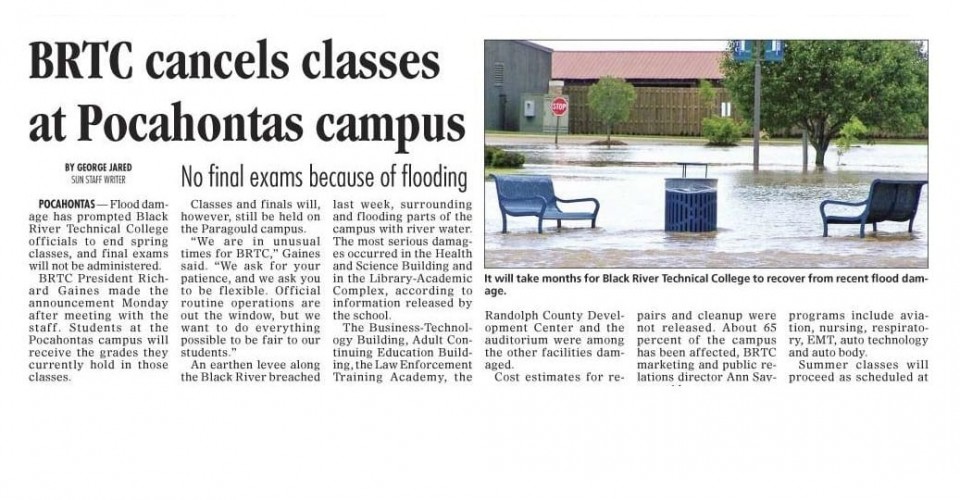 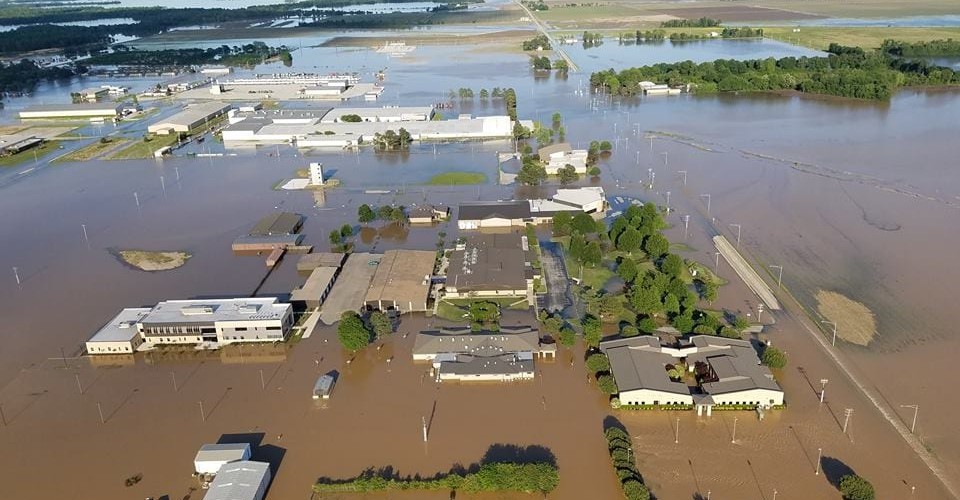 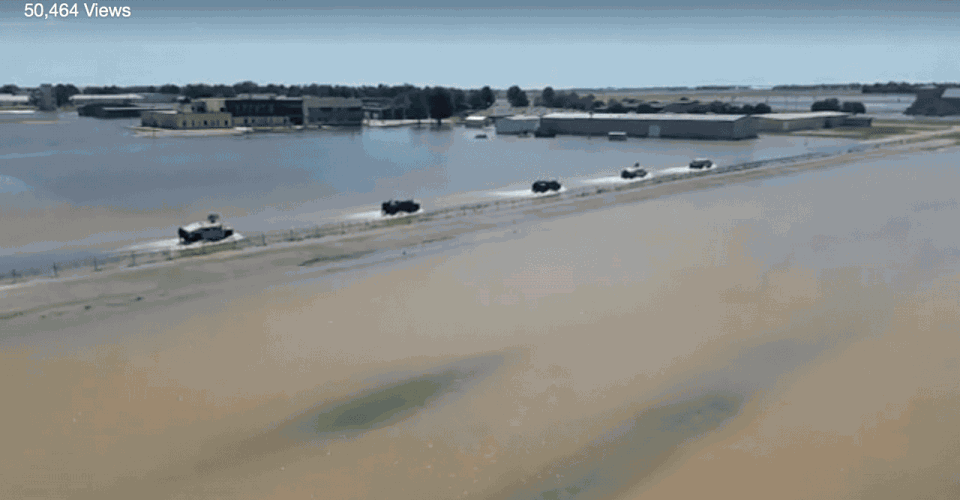 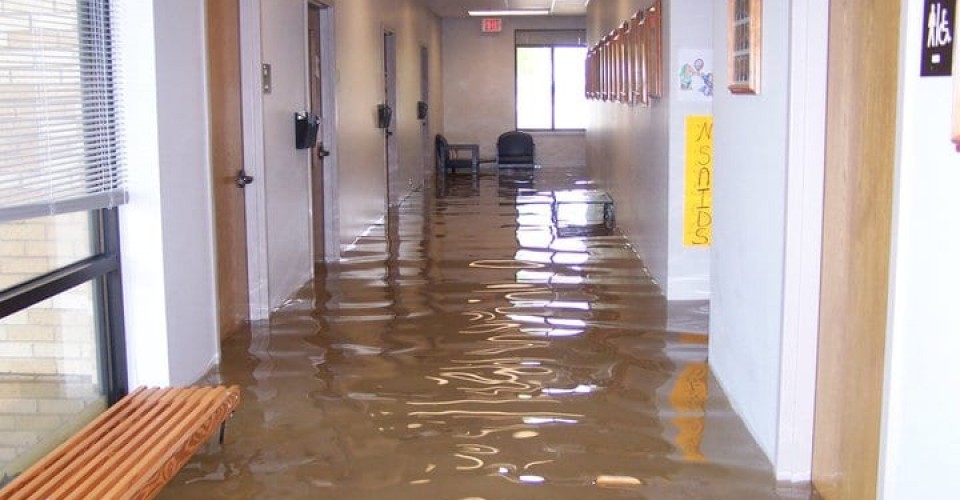 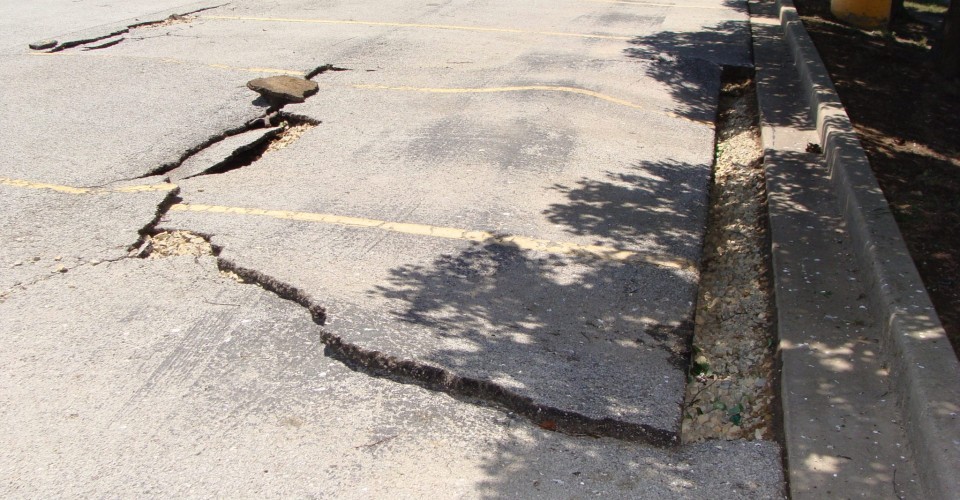 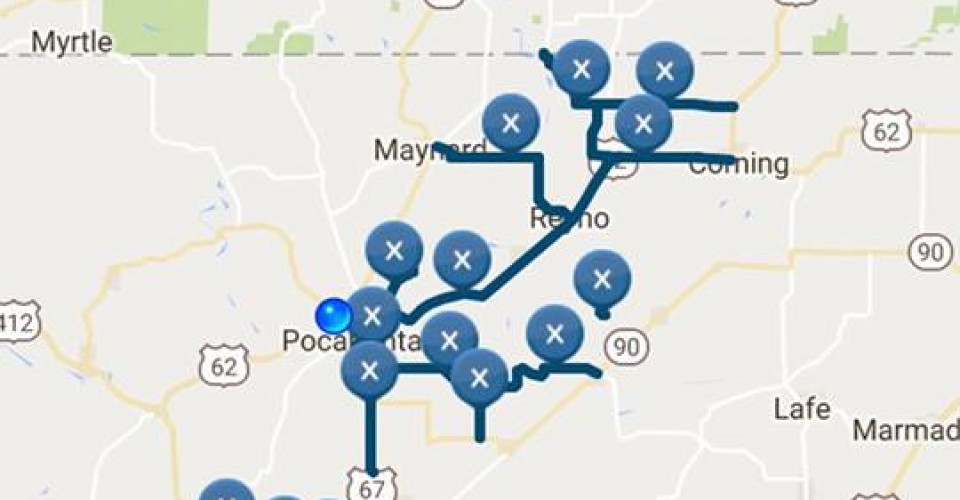 2017 Flood: AR National Guard on west side of campus

Randolph County is home to 5 rivers.  While usually a source of beauty and recreation, these rivers are beginning to pose serious threats to the economics and livelihood of residents in Pocahontas.  In addition, Walnut Ridge in Lawrence County is downriver of Pocahontas via both the Current River and Black River which join just north of Pocahontas, posing catastrophic flooding threats to Lawrence County as well.

Black River Technical College has been home to 2 catastrophic floods.

During the largest flood in Pocahontas history, the river was called to crest at 31.5 feet, the height of the levee.  However, Randolph County Judge David Jansen rightly predicted that the levee would breech:  “Jansen doesn’t think the river will crest at 31.5-feet for one ominous reason. As water rushes over the levee it will degrade and breaches or holes will form.”

The Black River exceeded its record levels and the levee failed, resulting in catastrophic flooding in the college, town, and county.  View aerial video of the flooding and levee break.

According to the National Weather Service in Little Rock, “A record crest of 29.0 feet was reached along the Black River at Pocahontas (Randolph County) on May 2nd (breaking the previous record of 28.5 feet in late April, 2011). Prior to this unprecedented rise, evacuations were ordered on the east side of town, and Highway 67 was shut down.” 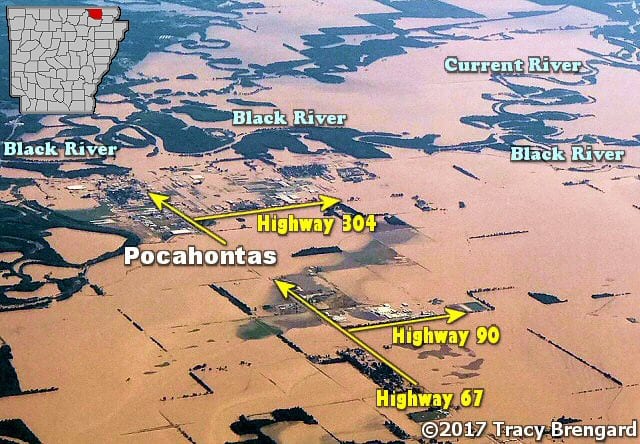 According to the NWS of Little Rock, “On the 3rd, the river started dropping as a local levee failed in multiple spots. This led to imminent and widespread flooding in parts of Lawrence and Randolph Counties. A Flash Flood Emergency (mentioning “an extremely dangerous and life-threatening situation”) was issued by the National Weather Service in Memphis, TN at 831 am CDT.”

More than 100 National Guardsmen were deployed to Pocahontas to help manage the disaster. 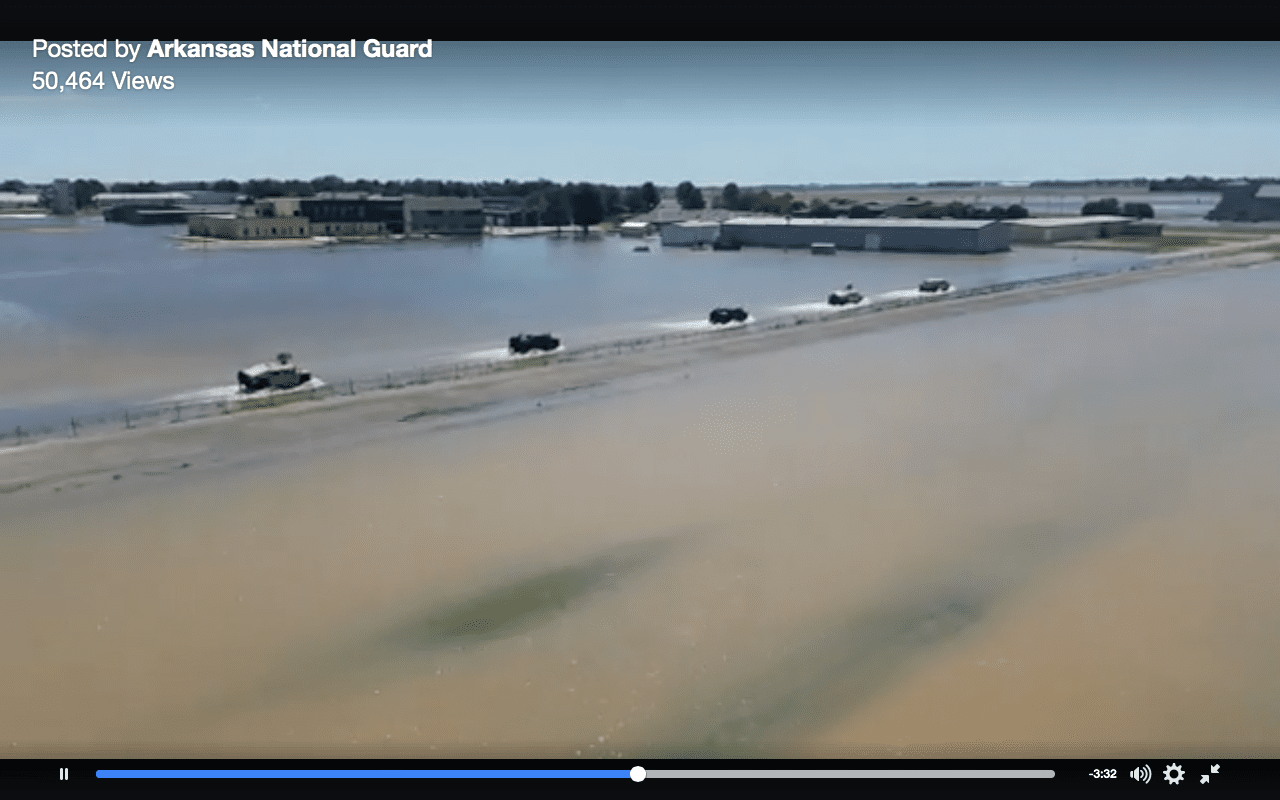 Other links of interest:

On April 28, 2011, the Black River at Pocahontas reached its historical peak of 28.47 feet, overfilling its banks and bursting its levee.  The previous record was set in August 1915.  The damage was unprecedented.

Pocahontas is split in two by the Black River.  To the west of the river are the foothills of the Ozark Mountains.  To the east is the delta.  Pocahontas has moved onto the delta-side over the past 40 years of growth, creating an industrial park along Highway 67 towards Jonesboro.

Black River Technical College is built on the east side of the river.  A levee runs for several miles along the Black River, protecting the low-lying farmland and East Pocahontas area.

When the river crested in April 2011, the levee broke, flooding all of east Pocahontas and shutting down Hwy 67:  “You couldn’t count the number of [levee] breaks,” said [Pocahontas Mayor Frank] Bigger, who flew over Pocahontas on Friday in a helicopter with Gov. Mike Beebe to assess the damage. 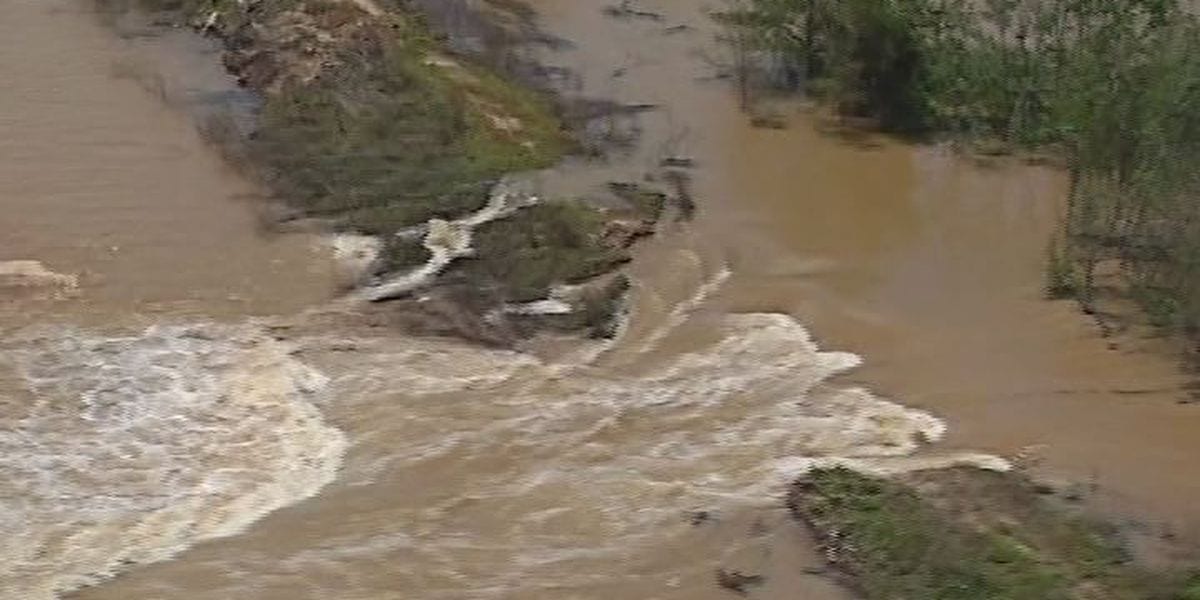 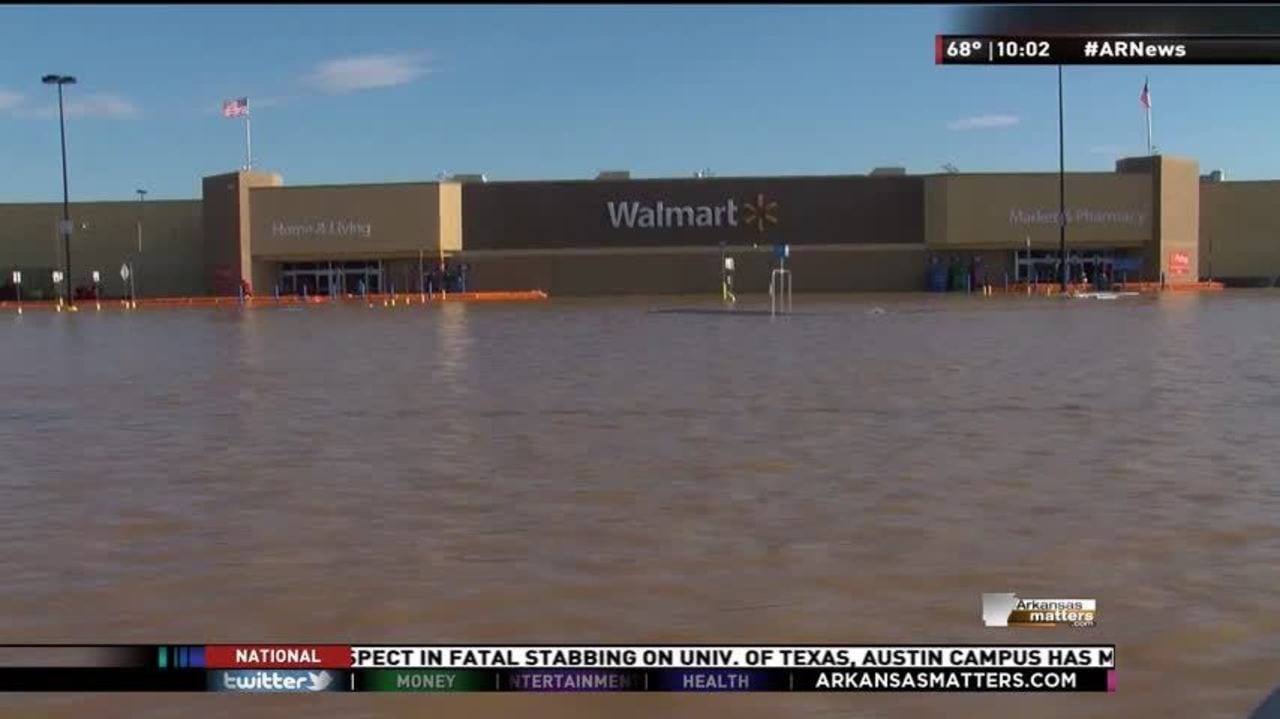 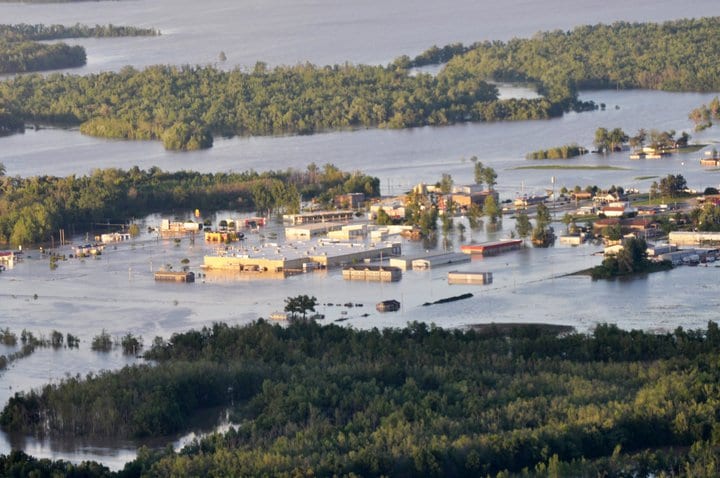 BRTC was at the end of the semester, so fortunately, while flooding shut down the campus, students were delighted to learn they did not have to take their final exams.  However, the entire summer and millions of dollars were spent addressing the campus flooding. 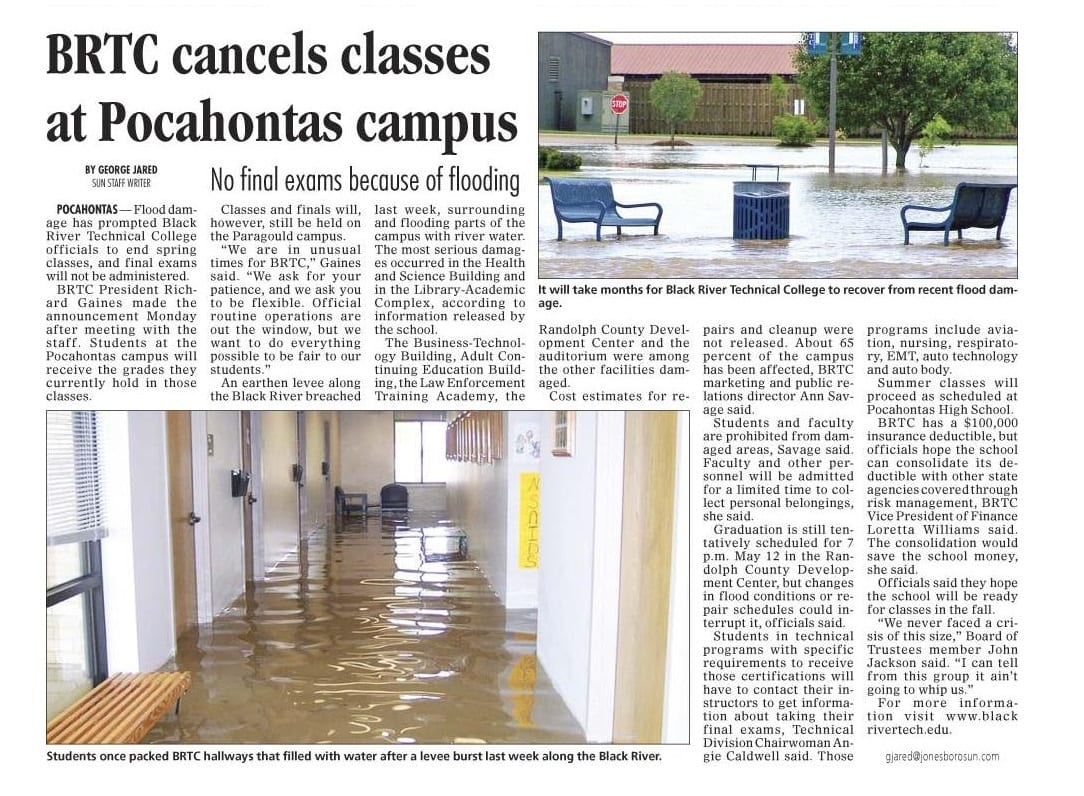 The flooding was both surprising and devastating to not only Pocahontas but also to towns downriver of Pocahontas, such as Walnut Ridge:  “There’s water all over,” Lawrence County Sheriff Jody Dotson said. “It’s all coming down from Pocahontas to us.”

The final cleanup took years and the overall cost of the 2011 flood was estimated to be in the “hundreds of millions of dollars.”

While the levees breached in 2008, the flooding only effected the Robil housing district very near the levee and the farmland near the Black River.  Still hundreds of individuals were effected and the local economy took a hard hit.

BRTC was spared although the college watched closely as the water inched nearer.

According to the National Weather Service in Little Rock, 4 of Black River’s highest 10 river stages and 3 of the top 5 highest levels have occurred in the past 11 years.

Most recent yearly Black River stages and their rank are as follows.  Notice, 2008 has 2 high stages less than a month apart.  The flooding below is considered major.

According to the National Weather Service in Little Rock, the Black River in Pocahontas has exceeded its major flood stage of 25.0 feet as follows, indicating more catastrophic floods are possible in the future.

The Black River has a history of flooding: