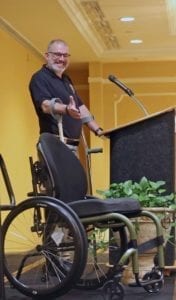 In March 2015, Sergeant Robert Bemis was responding to a vehicle fire on I-81 in Schuylkill County, Pennsylvania, when a passing vehicle hit Sergeant Bemis’ police cruiser, throwing him into the air.  He endured multiple surgeries and spent two years in rehabilitation before retiring from the state police in January of 2017.  Today, he continues to serve as a senior trainer with the Pennsylvania State Police.  Bemis was a state trooper for 24 years.  Prior to this service, he spent 6 years in the U. S. Marines, even providing security for President Ronald Reagan’s helicopter, Marine One.

According to his website, “Bob now continues to serve others by sharing the experience of his final 22 months as a Trooper.  His lectures have an inspirational message of resilience that spans a wide spectrum of audiences, and his book, Forged in Scars & Stripes: A Trooper’s Victory Over Critical Injury  showcases the fraternal bond shared by all who are called to serve.”

Fall 2016 LETA graduation will be held on Friday, November 16 at 1:00 p.m. in the Randolph County Development Center on the Pocahontas campus.  The public is invited to attend.